On June 11, 2019, Petróleo Brasileiro S/A – Petrobras and the Administrative Council for Economic Defense (CADE) signed a Term of Commitment of Cessation (TCC), pursuant to which Petrobras committed to the sale of all of its equity interest in eight of its thirteen refineries in Brazil. The TCC suspended an administrative inquiry, initiated in January this year by CADE’s General Superintendence, which investigated an alleged abuse of a dominant position by Petrobras in the oil refining market.

The divestment of this set of refineries represents approximately 50% of the country’s installed refining capacity, totaling 1.1 million per day of processed oil. The sale will also include terminals, oil pipelines and ancillary and logistics facilities for the movement of oil and oil by-products.

On June 28, 2019, Petrobras announced the refineries in the first phase of its divestment program, with the release of Teasers to the market, describing the sale process of four of eight refineries, namely the Abreu and Lima Refinery (RNEST); the Landulpho Alves Refinery (RLAM); the President Getúlio Vargas Refinery (REPAR); and Alberto Pasqualini Refinery (REFAP). Those interested in participating in the first phase of refinery divestment should express their interest by August 16 of this year.

The Teasers provide for the possibility of submission of a “Joint Offer” by one or more parties participating in the process. Pursuant to commitments assumed by Petrobras in the TCC, potential buyers shall not have a direct or indirect corporate relationship with Petrobras or its affiliates. In addition, the following assets shall not be jointly acquired by the same buyer or companies of the same economic group: (a) RLAM and RNEST; (b) REPAR and REFAP; (c) REGAP and RLAM.

According to information released by Petrobras, the Teasers for the second phase are due to be published later this year. The refinery divestment process is scheduled to end in 2021.

Described below are some of the features of the refineries now offered to third parties:

Located in the State of Pernambuco, the RNEST is responsible for about 5% of Brazil’s refining capacity, with processing capacity of 230 thousand barrels of oil per day. This refinery was designed to produce low sulfur diesel, as well as produce naphtha, fuel oil, coke, and LPG. RNEST will be sold along with a gas pipeline linked to the Suape Terminal.

Located in the State of Bahia, the RLAM produces 31 types of products and was the inducer of Brazil’s first planned petrochemical complex, with a processing capacity of 333 thousand barrels of oil per day. Besides producing LPG, gasoline, diesel and lubricants, RLAM is the only domestic producer of food grade, a food grade paraffin used for the manufacture of chocolate, chewing gum, amongst others, and n-paraffin, a by-product used as raw material in the production of biodegradable detergents. Also, the package includes 669 kilometers of gas pipelines and four terminals in Bahia.

Located in the State of Paraná, the REPAR is responsible for approximately 12% of the domestic production of oil by-products, serving mainly the markets of the States of Paraná, Santa Catarina, southern São Paulo and Mato Grosso do Sul, with a processing capacity of 208 thousand barrels per day. REPAR produces diesel, gasoline, LPG, coke, asphalt, fuel oils, QAV, propylene, and marine oils. Along with the refinery, 476 kilometers of oil pipelines will be sold, as well as five terminals.

Located in the State of Rio Grande do Sul, the REFAP has a processing capacity of 208 thousand barrels of oil per day, serving mainly the regional market, with a focus on diesel production. In addition to the refinery, 260 kilometers of oil pipelines and two terminals in Rio Grande do Sul will be sold.

The second phase, whose Teasers shall be released later this year, will comprise the following assets:

Located in the State of Minas Gerais, the REGAP has a processing capacity of 24 thousand m³ of oil per day, producing gasoline A, diesel, bunker, QAV, LPG, asphalt, green petroleum coke, fuel oil, sulfur, and turpentine.

Located in the State of Amazonas, the REMAN has a processing capacity of 46 thousand m³ of oil per day and connects to three ports, in charge of receiving and delivering oil by-products, and operated by Transpetro. It produces LPG, petrochemical naphtha, gas, QAV, diesel, fuel oils, light oil for electric turbine, oil for power generation, and asphalt.

Located in the State of Ceará, the Lubnor is one of the national leaders concerning the production of asphalt, and the only refinery in the country that produces naphthenic lubricants. It has a processing capacity of 8 thousand barrels per day.

Located in the State of Paraná, the SIX is located in one of the world’s largest shale reserves and has a processing capacity of 5.880 tons per day. The refinery produces LPG, combustible gas, naphtha, sulfur, and inputs used by various industrial segments

The SIX also functions as an advanced research facility in the refining area, where projects are developed along with Petrobras’ Research Center – CENPES, and universities. SIX’s technological park is the largest in Latin America concerning pilot plants, and consists of fifteen units created to meet refining process needs.

To facilitate the analysis, we have prepared the map below with the geographical position of each refinery: 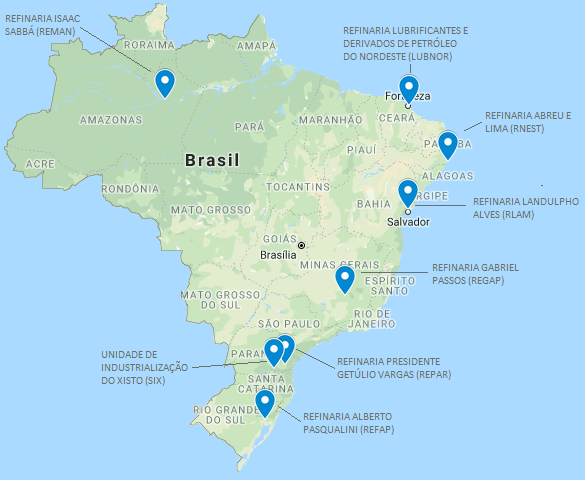 There is no doubt that the divestments announced by Petrobras as a result of the agreements signed by the company within the scope of the TCC may represent a genuine opening of the refining market, with the entry of new agents and investments to the sector, considering that today Petrobras is responsible for almost 100% of the refining capacity in Brazil.

Our team is available for any further information about Petrobras’ refinery divestment program.